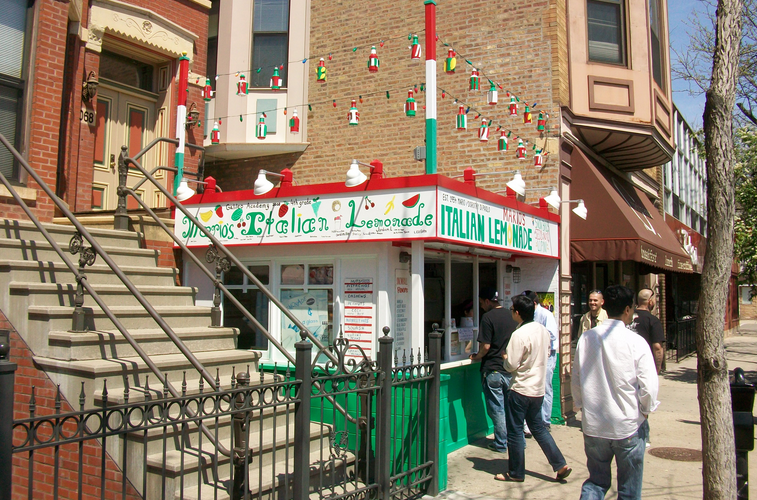 The Little Italy Chicago community is densely populated and diverse. While many of the inhabitants of the area are students attending theUniversity of Illinois at Chicago, there remains a significant number of Italian families living in the area. As the neighborhood becomes more affluent, young professionals have also begun to buy condominium space in the area.

Little Italy is a proud neighborhood; there are landmarks around the area that showcase Italian nationalism and culture. The National Italian American Sports Hall of Fame, founded in 1977, is “dedicated to preserving and promoting the history and heritage of Italian Americans in sports.” The Hall of Fame includes the Tommy and Jo Lasorda Exhibit Gallery, the Grand Piazza Ballroom, the Salvatore A. Balsamo Rooftop Terrace and the new Frank Sinatra Performing Arts Center.

Across the street from the Hall of Fame is thePiazza DiMaggio, built in 1998 as a gift from the City of Chicago to the Little Italy area. In the piazza is a much-photographed sculpture of Joe DiMaggio. Another landmark in the area is the Our Lady of Pompeii Church, a community center and shrine to Mary. Open to people of all faiths, the center is devoted to providing a refuge for prayer and education. Nearby is Arrigo Park, a 6-acre park whose main attraction is a large sculpture of Christopher Columbus. Named for Victor Arrigo, an Italian American who served as Illinois State Representative, the park is a picturesque haven in the midst of Little Italy.

Best Hot Chocolate in the City