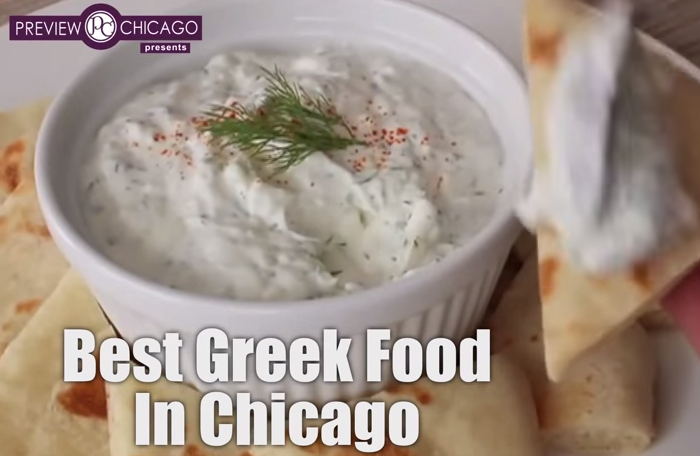 Flaming cheese is pretty dramatic, but bail out a Greektown foray with our food writer’s favorite dishes

Looking down the Greektown stretch of Halsted Street one evening, I’m reminded of my neighborhood Best Buy. Deciding where to dine here is like standing along the plasma TV

wall: placed side by side, the TVs reveal differences, however minute. But then you settle on one and realize they provide the same basic function.

This is both the gift and curse of Greektown, where you come for reliably fun group dinners and be reliably not blown away by the food.

The idea of Greek food speaks to me — I love olive oil as the foundation of cuisine, giving most savory dishes full body and a silky richness. I love lemon as acidic accent, dried oregano’s pungency, seafood cooked without accouterments, lamb

The ancient Greeks were regarded as originators of staged drama, which explains the restaurants’ penchant for theatrical flair. The dining room walls are often murals staring into the Aegean Sea, or you’re transported to some blue-on-white whitewashed cliff-side home, or a faux-marble living room

with a view of the Acropolis. You want columns? They’ve got columns.

And what is more melodramatic and delightful than flaming saganaki, purportedly invented here in the late 1960s? Brothers Chris and Bill Liakouras, founding owners of The Parthenon, claim to have been the first to ignite brandy table side over sizzling Kasseri cheese

. Now the “Opa!”-punctuated custom is inescapable across the U.S.

Chicago’s Greektown is an appealing place to visit these days, with the gleaming new National Hellenic Museum anchoring the neighborhood. Valet parking is free at most restaurants, and there’s a gregariousness about the restaurant staff that’s hard to deny. (“This is your home

,” said our host at Greek Islands.)

My problem is that Greektown suffers the same dilemma as Chinatown: Every restaurant doles out the same few dozen dishes, and maybe 5 percent of any menu will be an original Yia Yia’s proprietary recipe (more adventurous palates should check

out Wicker Park’s Taxim instead). Because the basis of Greektown tastes is so direct and uncomplicated (notice distinction between Greektown and Greece), I find interpretations among restaurants negligible. Octopus will be boiled, char-grilled, dressed with olive oil and lemon juice every place you go. You don’t go to Greektown for nuance, you come to have marinated grilled meats pushed in your face.

Then again, I’m not Greek, so my perceptions might not be so fine-tuned. So recently I spent a full week dining here, taking in so many Greektown restaurants I had skordalia shooting from my pores. I returned with my favorite finds.

Stuffed tomato and pepper (yemista) at Greek Islands. A summertime staple (served Tuesdays, Wednesdays, Saturdays year-round here), yemista ($12.95) is one each of a green pepper and tomato with caps removed, hollowed out, smoothed and stuffed with ground beef, sauteed rice, feta cheese crumbles and pine nuts. This is covered with tomato sauce and accompanied with a potato wedge, somewhat resembling the Italian flag. (A Greek friend tells me they’d never throw tomato sauce over yemista in Greece, though that didn’t offend me in the least.) 200 S. Halsted St., 312-782-9855

Manitaropita at Artopolis. Artopolis was never purely Greek; its food and market were outward-looking at the rest of Europe. Its terrific manitaropita ($4.50), a savory mushroom pie baked in a hearth oven, is something you’d expect more at a Parisian patisserie. The only semblance of Greece is the crust, which starts with house-made phyllo dough, then is crossbred with butter to create a puff pastry that flakes into a thousand pieces. The filling is Portabello and white mushrooms with a velvety three-cheese blend of Emmenthal, Swiss and Kasseri. 306 S. Halsted St.; 312-559-9000

Taramosalata at Elea Mediterranean Food Market. Ever since Elea opened in August, Mary Argy (that’s Aunt Mary to you) comes in the deli once a week to whip up — literally — her famous taramosalata ($6.99 a pound), the Greek caviar dip ubiquitous during Lent. Pro tip: With restaurant versions, the pinker the taramosalata, the more inferior the roe’s quality. Aunt Mary’s taramosalata is beige like hummus

Most Unique Homes in Chicago

What $5 Million and Some Change will Buy You in Chicago