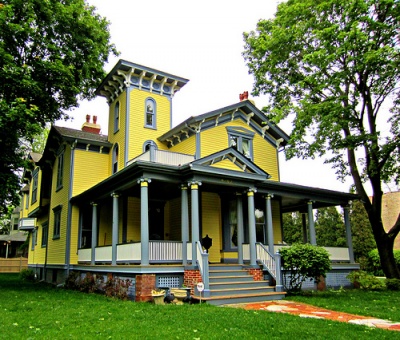 Originally dubbed “Irvington” in honor of Sleepy Hollow author Washington Irving, this northern Chicago neighborhood began to take shape in the late 1800s. Chicagoans in search of a low-key area, but still close enough to work downtown, quickly realized the suburban glory of Irving Park. It didn’t take long before the neighborhood was brimming with culture and community.

Because housing was more affordable here, it appealed not only to those with generous pocket books, but middle class citizens as well. In the 1930s Irving Park became a popular destination for many Eastern European immigrants and as a result, there are plenty of Polish and European influences in the neighborhood today. Recent years have seen a huge swell in Irving Park’s Hispanic population; Latinos now make up almost half of the neighborhood’s residents.

Irving Park has an active commercial segment that sprouted from a long line of merchant settlers and independent store owners. A good portion of the businesses are service-related, however, there is a healthy dining district in Irving Park with several neighborhood taverns and music venues for those who seek the nightlife. Irving Park Road and Montrose Avenue (the main drags) are the community’s happening havens. Residents visit these strips to do the errands and then return in the evening to grab a bite to eat and have a drink at a local pub.

There’s no shortage of sports, culture and family-fun in this northwest side Chicago neighborhood. Outdoor parks and recreational centers provide tons of activities for youths and adults alike. When the weather is nice, you can spend the afternoon playing baseball, soccer or tennis at the historic Independence Park. Swim a few laps in the pool, beef up at the weightlifting facilities, or just hang out in the park’s rec center. Horner Park is another extracurricular destination that offers countless educational programs ranging from art, music and theater classes for children to dance lessons for senior citizens. Add California and Revere parks to Irving Park’s list of open air retreats and it’s easy to see why the neighborhood is such a popular place for Chicago families to settle down.

Real estate prices are as wide-ranging as the economic and ethnic mix of the community. The home sale price for a one-bedroom condo in Irving Park averages around $180,000, while two-bedrooms are priced between $150,000 and $400,000. Irving Park’s quaint townhouses can cost anywhere from $300,000 to $800,000, typically depending on the number of rooms and condition of the home. Also tucked along the streets of Irving Park are a number of two and three-flat condos, frame houses and cozy bungalows. Much of the architecture here is reminiscent of the comfortable residences that make up Chicago’s Oak Park suburb. Similarly, the quiet side streets are devoted to family life with sidewalk lined blocks and grass-covered yards.