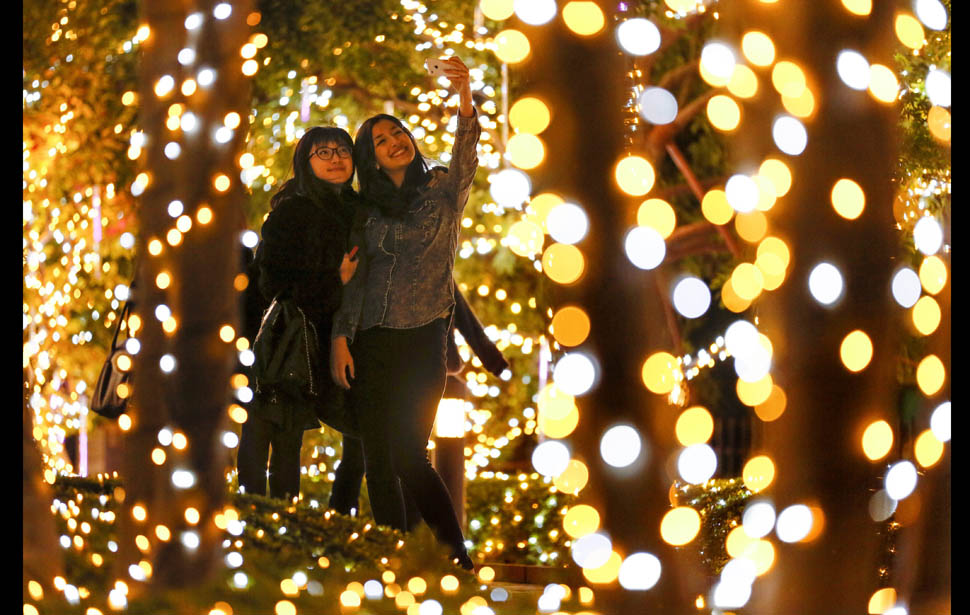 As if Chicago wasn’t already dazzling enough, the holiday season will take the urban light show up a notch. From the awe-inspiring Magnificent Mile Lights Festival to the animal-centered Lincoln Park ZooLights, the city abounds in opportunities to rekindle the Christmas spirit even if you’re well past the age of believing in Santa. Here is a list of the best places to be wowed.

(Note: Don’t forget your mittens; the lights might warm up your heart, but they won’t protect your hands from freezing.)

When you live in a city famous for its grueling blizzards, you make the most out of every street celebration while you can still go outside without a face mask.

Last night’s ceremony is yet another proof of Chicagoans “go big or go home” approach to the holiday season. According to organisers, over 1,000,000 lights on 200 trees along North Michigan Avenue, Chicago’s largest shopping district, were lit up and a Disney-like world came into existence. The crowds were then treated with a mesmerising firework show over the Chicago river that literally turned the night into day.

The notorious “Cloud Gate,” aka “The Bean” just got some serious competition. Chicago’s 102nd Christmas Tree will be relocated from Daley Plaza in the Loop, its usual spot for 50 years, to Millennium Park. This way, locals and tourists alike will get the biggest bang for their (travel) buck: an ice-skating rink, a jaw-dropping sculpture and a 63-foot worth of lights. The tree, brought to life Tuesday, November 24, at 5.30 p.m., will rapidly become everyone’s selfie sidekick.

Unless you have relatives living at the North Pole, this is the closest you’ll get to Santa’s home. Scheduled for December 5, 2015 through January 10, 2016, the Winter WonderFest includes 24 rides such as a an indoor Ferris Wheel and a Reindeer Train Express. But the real show-stopper — in addition to nearly 500 trees decorated with 25,000 ornaments — is a 42-foot giant tree adorned with sparkling lights. (You might want to bring sunglasses.) And the best part? The general admission is $10, a small price to pay compared to the cost of a plane ticket to Alaska.

What happens when a free admission zoo gets blanketed into a sheet of multi-colored lights? Well, even as an adult, you can’t help but think that Madagascar’s creators were onto something: animals have the ability to speak.

Sweet treats, live ice carving and rides on the Lionel Train Adventure are just a couple of things that keep the magic alive for little ones. There’s a better surprise for grown-ups: BrewLights, a beer-tasting event that allows participants to sample a dozen of different draft beers. The ZooLights  — more than two million  — will shine Friday to Sunday, from November 27 until December 13, and then nightly until January 13.

Located in the heart of Grant Park, this architectural jewel seems, particularly at night, plucked from a Christmas postcard. Surrounded by skyscrapers and with more than 800 shimmering lights accompanied by music, the fountain offers a hypnotizing spectacle. While its powerful glow can be hard to capture on camera, it makes for an unforgettable memory. Fun fact: the fountain was featured in several movies including “Married…with children.”

Making a Difference for the Holidays

video: A remodel you won’t want to miss

I am a 26-year-old Romanian journalist who currently lives the American Dream in the buzzing city of Chicago. When I'm not doing social media gigs, I write about everything under the sun from real estate to wellness.