Things To Do in Your Chicago Neighborhood in July 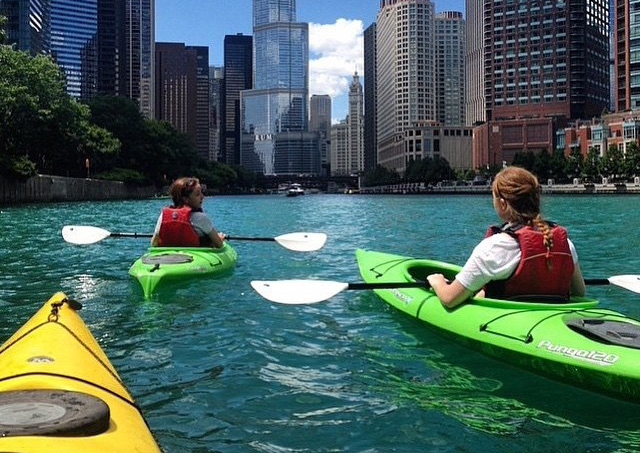 The free Health and Fitness Expo is Fri. & Sat. at McCormick Place. The 5K is Saturday, and the Rock ’n’ Roll Chicago Half Marathon & 10K are Sunday in Grant Park, followed by an after-festival at Butler Field.

BenFest serves food, beer, music, and activities for kids on the grounds of St. Benedict’s parish, with a vendor market on the adjacent street. Donation.

Relive the fireworks of first-time love in Ah, Wilderness! a delightful tale of adventure, angst and young romance by Eugene O’Neil at Goodman Theatre.

Grant Park Music Festival is an outdoor classical music series at Jay Pritzker Pavilion in Millennium Park. The rear seats are free, or bring a blanket or lawn chairs.

Kiss Kiss Cabaret is a fun mix of burlesque, off-color comedy, music, magic, and variety acts at Uptown Underground for age 21+ on Fridays and Saturdays.

The Magic Parlour is an evening of close-up magic by an award-winning magician in the beautiful Palmer House Hilton Hotel.

Movies in the Parks

See 250 Movies in the Parks, if weather allows. Free.

Watch hundreds of boats leave for the ritzy Race to Mackinac at the Ashore Thing with a cash bar at the east end of Navy Pier. Free.

Electronic music at the beach

Volleywood is an electronic beach party with a bar and a volleyball tournament at North Avenue Beach for age 21+.

Southport Art Festival is a mellow event with live music, artists, food, and a kids’ area on N Southport Ave. at Waveland. Donation.

Day Out With Thomas includes a 20-minute train ride, stories, videos, music, and crafts for kids at Illinois Railway Museum in Union.

The Second City’s Fast, Loud & Funny promises an “in-your-face indictment of the modern condition” including social media, dating, and auto-tuned relationships at Up Comedy Club.

Madagascar brings the movie vividly to life on stage with high-energy dancing and singing by everybody’s favorite zoo refugees at Chicago Shakespeare Theater.

Dearborn Garden Walk admits you to 20 award-winning gardens (some with live jazz or classical music), a garden exhibition, and an architectural walking tour of historic Dearborn Street.

Soulful Chicago Book Fair “is a celebration of literacy and literary arts found throughout the African Diaspora” with food vendors on E. 61st Street (from Cottage Grove Ave. to M.L.K. Drive). Free.

Kayak with a guide on Lake Michigan during the day or on the Chicago River in the evening.

Get a seat or sit on the lawn to see films on a 40-foot screen at Millennium Park Summer Film Series on Tuesdays plus Aug. 24. Free.

Enjoy a buffet meal aboard the Spirit of Chicago Dinner Cruise, with views of the Chicago skyline and DJ dance music, departing from Navy Pier.

Jazz at the aquarium

Hear musicians and vocalists, see views from the terrace, buy cocktails & food, and visit the aquarium at Jazzin’ at the Shedd at Shedd Aquarium.

Adult night at the planetarium

Adler After Dark: All-Star explores “the intersections of sports and science” including sports on other planets at Adler Planetarium for age 21+.

Celebrate the cultures of Chicago’s 28 sister cities with food, drink, and music at Unifest on the River on the Chicago Riverwalk (from Wells to Franklin). Free.

Peter and the Starcatcher is a swashbuckling prequel to Peter Pan, a madcap adventure with music, pirates, orphans, and secret agents at Metropolis Performing Arts Centre in Arlington Heights.

Shop for a wide variety of art made by 100 juried artists at the new Artfest Michigan Avenue. Free.

Disability Pride Parade goes from behind the library to Daley Plaza for a 12:30 post-parade event. Free.

Make art and explore special activity stations during Kaleidoscope Family Festival in the Ryan Education Center at the Art Institute of Chicago. Free.

Pig City Challenge is a barbecue competition and music festival with a bar and food for sale (chicken, brisket, ribs, and pulled pork) in Merrionette.

An American in Paris tells the romantic post-war story of an American soldier and a mysterious French girl with music by Gershwin at Oriental Theatre.

In this “lost” episode of The Addams Family TV show, the daughter falls in love and invites a “normal” boy and his parents to dinner, live onstage at Prop Thtr. All tickets include a free beverage or concession item.

Tour de Fat is “a mix of musicians, circus performers, vaudeville acts, magicians, comedians, and mind-blowing provocateurs” with Fat Tire beer and music by “The Roots” (as seen on the Tonight Show) at Huntington Bank Pavilion at Northerly Island. Children 12 and younger are free.

Barry Manilow, the best selling adult-contemporary artist of all time, belts out his hits (Copacabana, Mandy, Ready to Take a Chance Again) at the Allstate Arena in Rosemont.

Discount wine-tasting tickets 2 for $20 at Groupon.

Buy samples and then vote for your favorite at Bloody Mary Fest, which has food vendors and live music at Everts park in Highwood. Free admission.