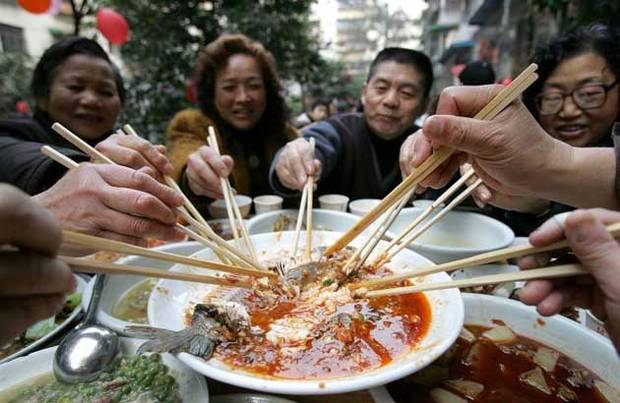 Sometimes, when the urge to have Chinese food strikes, nothing satisfies until you get it. When that happens, count on 10Best to point you in the direction of the best Chinese restaurants in Chicago. When we recommend popular eateries like Joy Yee Noodle Shop, or tell you that Lao Sze Chuan gets good reader feedback, you can believe it. We’ll make sure you get – and eat – the best Chinese food the city has to offer.

A cluster of the city’s best Chinese restaurants are in the Chinatown neighborhood, just south of downtown, but many other top-notch places exist across the city. Whether you prefer well-known Chinese dishes like egg rolls and crab rangoon, or if you’re feeling more adventurous and want to try exotic foods (braised shark fin, anyone?) you’ll find it all on the menu. And with a fortune cookie or a fruit smoothie to top it off.

A specialty of many of Chicago’s Chinese restaurants is dim sum. This type of dining consists of bite-sized, steamed dumplings stuffed with a variety of fillings, brought to your table by little wheeled carts and served in small bamboo bowls. The food, almost like Chinese tapas, is placed on a circular, moving platter, so it’s perfect for sharing with families or large groups.

10 Friendship Chinese Restaurant
On Friendship’s menu, a man identified as “Chop Suey Man” writes that the food served at Chinese buffets makes him “weep bitterly.” That’s because beautiful food and fine dining are at the heart of this restaurant, with locations along the lake and in Logan Square. The menu items are pretty familiar and pricier than most Chinese fare, but they’re presented in an impressive, fusion style. Some of the most raved-about dishes include the crab Rangoon appetizer, the honey walnut shrimp, and the Hawaiian pineapple cake. If you’re on a budget, go on Tuesday nights, when they offer $9.95 entrees. During the summer, on weekend nights, there is live jazz music and you can see the fireworks show at dusk from nearby Navy Pier. (7732270970)

9 Ken Kee
The menu at Ken Kee’s does have some familiar items, like pepper beef in black bean sauce and fruit smoothies. But what makes this restaurant stand out among the others in Chinatown is its unusual menu items. That might mean fried spaghetti and sliced lotus root, pork intestine and duck tongue, or duck chins and goose intestines. So bring your most adventurous eaters, and try something you’d never normally eat (and may never eat again). Or, just stick to the sliced pork and watercress soups, or more conservative dishes, like the beef brisket and turnip, served in a mini wok. (312-326-2088)

8 Lao Hunan
The food is super spicy and the decor is unique – it celebrates China’s Communist dictator Chairman Mao. There are Communist military uniforms, photo of Mao, and the Communist saying, “Serving People,” hanging on the wall. But famed restaurant owner Tony Hu is also serving food from China’s south-central province. That means lots of hot chili pepper flavors and strong garlic spices. Rave reviews go to the Mongolian Beef, but also recommended are Hunan Chili made with black beans, Jade Tofu and Xiang Xi chicken. Almost all of the dishes bring the heat, so make sure you have extra glasses of water nearby. (312-842-7888)

7 Dee’s Mandarin
This Lincoln Park restaurant offers the best of both worlds — Chinese cuisine and a great sushi bar in a more romantic and cozy setting than its Chinatown competitors. Dee’s has live jazz music playing, dimmed lighting with candles, modern food presentation, a fireplace and comfortable booths. On warm evenings, you can dine in their lovely outdoor garden area. The menu’s Mandarin and Szechuan entrees include both mild and spicy dishes. The Mongolian Beef gets rave reviews, but other good picks are the kung pao chicken, the crab rangoon, or the mooshu pork. The authentic sushi bar offers only the freshest fish. (773-477-1500)

6 Lee Wing Wah
Come hungry, because heaping portions of authentic Cantonese food are served in this Chinatown restaurant. Specialties include the pan-fried “salt and spice” shrimp, giant shell-on pieces with a thin layer of crispy crunch. Add flavor by dipping them in chili oil (which doesn’t automatically come with it, so be sure to ask the waiter to bring some). Other popular dishes include the curry-flavored Singapore noodles, the garlicky Chinese spinach, and the roast duck served with a tangy hoisin sauce. The large dishes are good for family-styled dining. As in many Chinatown restaurants, fruit smoothies with tapioca balls are a staple. Lee Wing Wah’s budget-friendly prices leave your stomach and your wallet full. ((312) 808-1628)

5 Lao Sze Chuan
This restaurant only knows one size: large! Even the menu is large, with 15 pages of dishes that come heaped high and full of tasty, spicy Szechuan flavors. When it comes to Chinese food in Chicago, this place is known for being “the real deal.” Try the “chef’s special,” a dry chili chicken, or the Chengdu dumplings, crispy Chinese eggplant with ground pork. Other popular dishes are the twice-cooked pork, mapo tofu, sesame chicken and Szechuan prawns. Lao Sze Chuan has two other locations, in suburban Downers Grove, and in Chicago’s north side Uptown neighborhood, at 4832 N. Broadway Ave. (312-326-5040)

4 Joy Yee’s Noodle Shop
Chinatown restaurants can be a bit intimidating for those not familiar with Chinese food. That’s why this bright, hip, low-priced restaurant is so popular. The menu is filled with authentic Chinese, Korean, Vietnamese and Thai dishes presented on a massive, photo-filled menu. Good bets are any of the noodle soups or entrees, such as Thai pad woon sen (glass noodles mixed with chicken, shrimp and vegetables), pork buns or chicken satay. Balance that with a fruity bubble tea with tapioca balls. Even if you don’t want to trek to Chinatown – Joy Yee Noodles recently opened a few new locations around the city and suburbs. (312-328-0001)

3 Silver Seafood
It might not look like much from the outside, but this is the best spot for fresh Chinese seafood outside of Chinatown. Specialties from the massive menu include fried rice, sea bass, tilapia, Peking duck and crab. For a splurge, try the tasty shark fin soup with crab meat. Other popular dishes include Mongolian Chicken, or a heaping plate of delicious dungeonous crab that will have you licking your fingers. Because the menu varies so much, it can be a place for low-priced every day meals, or more a more gourmet experience. The restaurant can get a little loud, as it’s a popular spot for large groups and families. (773-784-0668)

2 Phoenix
Spy something on a rolling cart that intrigues you? Hail one of Phoenix’s many servers, and you’ll swiftly be in business. This popular restaurant includes upstairs rooms which are a bit more formal. The Cantonese-styled menu includes everything from traditional offerings, like shrimp dumplings and orange beef, to more innovative ones like shark fin soup and jellyfish. The BBQ pork buns and braised beef ribs are among its most popular dishes, and the wait staff will continuously refill your tea cups throughuot the meal. There can be long waits for tables on weekends, so weekdays are a better choice if your time is limited. (312-328-0848)

1 Cai
Traditional, Hong Kong-styled dim sum is the specialty in this upscale second-floor restaurant overlooking the Chinatown Square Mall. The decor is not impressive, but the food is. That includes the well-made steamed dumplings filled with all sorts of fresh ingredients, including scallops. Other good choices are the shrimp rolls, the Congee (rice porridge with bits of pork or egg), the meaty Char Shio Bao (barbecue pork buns) and the sweet Dahn Tah (egg custard). No matter what you pick, it’s made to order and brought to the table piping hot. Even though the dining room is large, expect waits during peak hours. ((312) 326-6888)

The Most Expensive Rentals in the Chicago