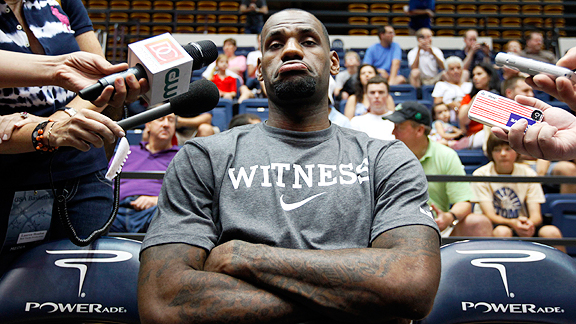 LeBron James is Selling his Miami Mansion, strike that. He sold it for $13.4 Million.

Teams are lining up to woo LeBron James in hopes of inking the four-time MVP to a contract and tilting the balance of power in the NBA. The Miami Heat and Cleveland Cavaliers appear to be the early favorites, but James’ agent, Rich Paul, reportedly met with at leastfour other teams seeking James’ signature, including the Dallas Mavericks, Houston Rockets, Los Angeles Lakers and Phoenix Suns. Reports are swirling that James wants a maximum level salary next season, which is projected to be about $20.7 million for an 11-year veteran like James. It will continue a tradition of massive paydays for James, who banked $72.3 million in salary and endorsements over the last 12 months and $450 million during his career, by Forbes’ count. Here is how he did it.

James has earned $126 million in playing salary during his NBA career (he lost $3 million in salary during the 2011 lockout), but his biggest checks have always come off the court from endorsement deals. James signed a seven-year, $90 million pact with Nike before even being drafted by the Cavaliers with the No. 1 overall pick in 2003. He added agreements with Coca-Cola, Cadbury Schweppes/Bubblicious, Juice Batteries and Upper Deck as a rookie. James’ first year salary with the Cavs was $4 million, but he generated more than four times that amount from sponsors

James continued to be an endorsement darling, as he led the Cavaliers from the dregs of the NBA to one of the league’s premier teams. He added deals with lawn mower maker Cub Cadet, McDonald’s, Microsoft and State Farm and earned $43 million in salary during his final three years with the Cavs after his four-year rookie contract expired.

James joined the Heat in 2010 as a free agent with a six-year, $110 million deal that matched fellow free agent Chris Bosh. Both players took less money to join the Heat and could have guaranteed themselves an additional $30+ million apiece to re-sign with their respective teams, the Cavaliers and Toronto Raptors, in 2010. James and Bosh had matching $19.1 million salaries last season, which tied for eighth highest among NBA players (ninth if you count Gilbert Arenas and his $22.3 million amnestied salary). At least four NBA players will earn more than James next year if he signs for the $20.7 million max. Kobe Bryant is due $23.5 million from the Lakers and will be the NBA’s highest-paid player for the fifth straight year, while Amar’e Stoudemire ($23.4 million), Joe Johnson ($23.2 million) and Dwight Howard ($21.4 million) are all set to earn more than $21 million as well.

The move to the Heat, and the TV special announcing the decision, caused a significant backlash against James, but it did not hurt his earnings power. Winning two titles certainly helped rehab his reputation. James was well aware of the power of winning when he joined the Heat. “Winning an NBA Championship is the ultimate goal and winning and succeeding in basketball drives all business,” James told Forbes in 2011.

A year after the move to the Heat, James and his marketing firm, LRMR, partnered with Boston based Fenway Sports Management. The deal netted James a seven-figure cash payout, and he also became an investor in British soccer club Liverpool, which is owned by Fenway Sports Group. The marketing partnership created a host of new opportunities for James, particularly in Asia, where Liverpool has a huge following. James signed a two-year, multi-million dollar deal in 2012 to shill for Dunkin’ Donuts and Baskin-Robbins in Asia. He entered into a partnership last year with Chinese internet services firm Tencent. James serves as a spokesperson for the company’s “NBA2K Online” video game. Other recent partners in the James endorsement stable include Samsung Electronics and Audemars Piguet (see “Red Sox Nation Goes Global”).