Hurry Before There’s Nothing Left 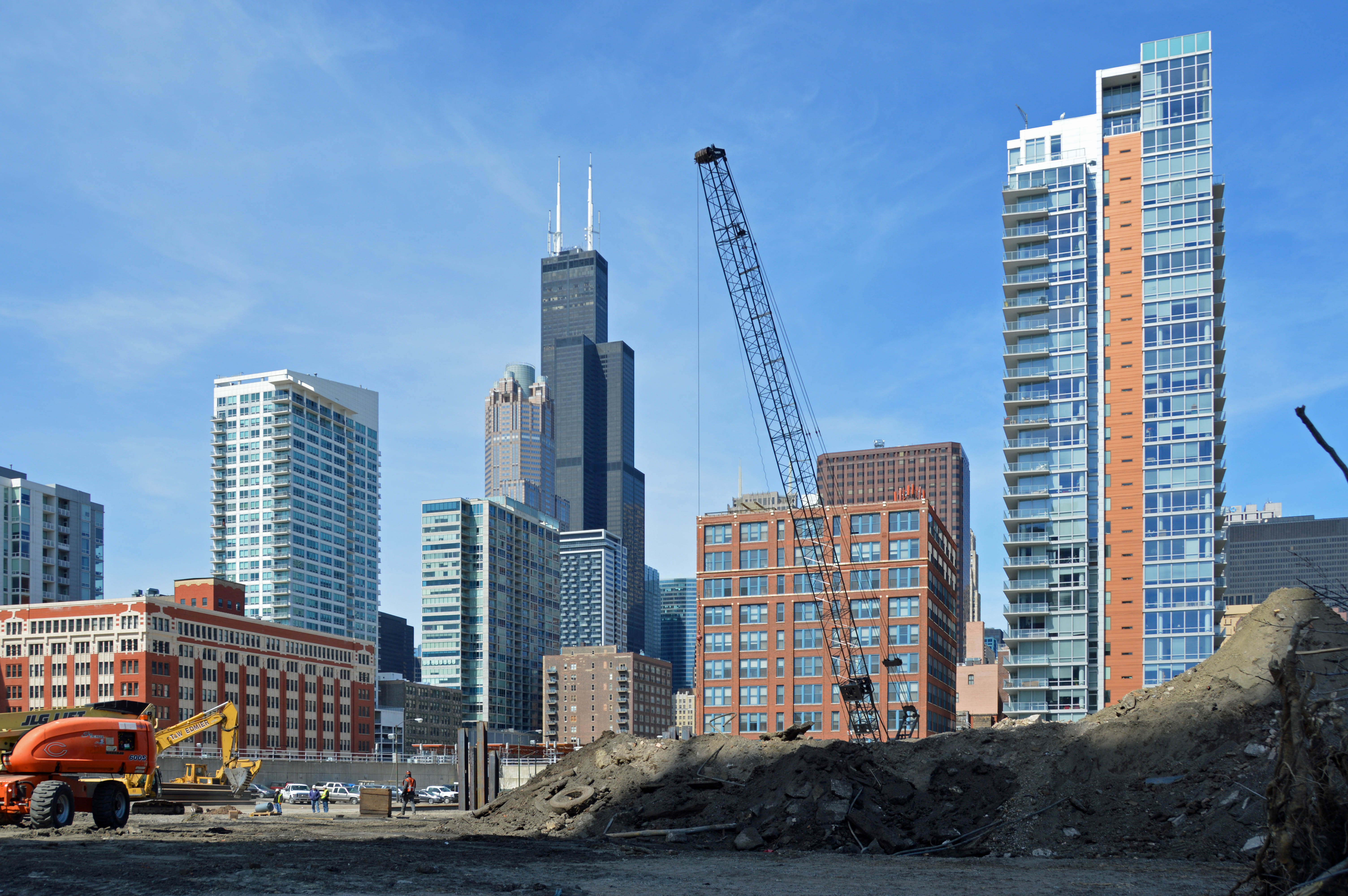 by : Samantha Lebbos 7 years ago
0 shares

Hurry before there’s nothing left!

Starting from the south, first up is the 40-story, 1,206-room Marriott Marquis at McCormick place which is now drilling caissons:

[All photos by Shawn Ursini]

Next door, the site has been cleared for the 13-story Center Point Properties data center at Calumet and 21st…

as well as the new arena along Cermak Road.

Further north at 1333-1345 South Wabash, CMK’s 144-unit condo project is finished, while the 28-story rental project One Triple Three next door has excavated the site.

Crossing into the Loop Community Area, JDL’s 1000 South Clark with 29 floors and469 rental units is just about topped out with glazing now covering most of the facade. When the Hartshorne Plunkard-designed structure rose, many watchers were surprised that the west side facing the Rock Island Metra tracks was not glass like the more prominent eastern exposure seen here but rather is a more austere concrete wall with punch-hole windows.

The SCB-designed 1001 South State is now really starting to take off with the tower past the more complicated levels of the parking podium and amenity deck. The 40 story, 398 unit structure now reaches the 14th floor.

Also designed by SCB, the 690-unit rental tower at Block 37 is really starting to make a visual impact as it is also getting very close to topping out.

Also in the Loop, John Buck Company’s MILA, the bKL-designed 402-unit rental towerat Michigan and Lake is now about 40 floors up with its first panes of glass now installed.

More crucial construction boom coverage:
Mapping Chicago’s 18 Highrises Under Construction Right Now
Springtime Check-In on Construction Sites Throughout the City
Making Sense of the Construction Boom Underway in the Loop
Developers to Deliver 3,000 New Downtown Apartments in 2015
How Downtown Became the Hottest Market for Chicago Renters
At the riverfront trio to the west, crews at the Goettsch Partners-designed 150 North Riverside has been busy installing steel as the much anticipated cantilever takes shape and the tower crane has been erected.

Meanwhile across the street, the Pickard Chilton designed River Point office tower at 444 West Lake has about 30 of its 53 floors of steel now framed out.

Across the river, the bKL-designed Wolf Point West tower has just topped out its 48 floors which will contain 507 rental units.

In Streeterville, Golub & Company’s SCB-designed Moment with 41 floors has now climbed up to the 14th floor.

Just up McClurg, the Gensler-designed Ability Institute of RIC is now almost fully clad, however another year’s worth of interior build outs is still to come

Back on Grand Avenue, the 57-story David Hovey-designed Optima City Center IIremains in a holding pattern at this time after completing foundation work.

Over in River North, Magellan’s new apartment tower at the old Gino’s East/Planet Hollywood has gotten a demo permit for the existing building, however the roof is still in use for now as parking.

While Magellan’s other Wells Street project, the bKL-designed 34-story rental tower at Superior Street to the north has caisson drilling well under way.

Also on Wells, the 11-story apartment building developed by Akara Partners is now getting its facade. For those of you who thought this was just going to add to River North’s inventory of beige painted concrete, well surprise: the facade appears to be hand-laid brick!

On the Loyola Water Tower Campus, the new 10-story business school designed by SCB is just about finished, as is the 36-story, 367-unit apartment tower next door.

Further north along State Street, the even more exclusive 4 East Elm, with 35 units in a slender 25-story SCB-designed tower has reached the 16th floor.

And finally, two upcoming projects which will soon be starting site preparations: The Sinclair (aka The Tower of Jewel) and Chicago/Hudson:

River North Is Getting An Apartment And Retail Tower

Take A Peek Inside Robin Williams’ Napa Estate On The Market