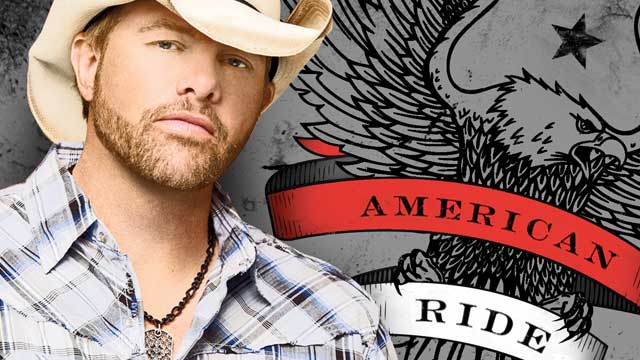 According to Taste of Country:
Toby Keith was so touched by the sacrifices of a 93-year-old veteran that he was visibly moved to tears at a recent concert in North Carolina.

Keith was performing at PNC Music Pavilion in Charlotte on Aug. 21, where he gave his usual patriotic encore, and beforehand he introduced Lt. Colonel Harry Frizzell, Sr. “Listen, 34 years of service — Vietnam, Korea, World War II, and he put four kids through school … I wanted ya’ll to see what a true American hero looks like,” Keith said, raising the arm of the older man, who was rolled onstage in a wheelchair.

Keith dedicated his stirring performance of “An American Soldier” to Frizell, which ended with an electric guitar rendition of “The Star Spangled Banner.” Keith then strapped on his trademark red, white and blue acoustic guitar as the crowd chanted, “U.S.A.! U.S.A.! U.S.A.!” and launched into “Courtesy of the Red, White and Blue (The Angry American)” to close out the concert with a rousing finish that included a horn section and shooting flames, while Frizzell enjoyed the performance from the stage, wrapped in the American flag in his chair.