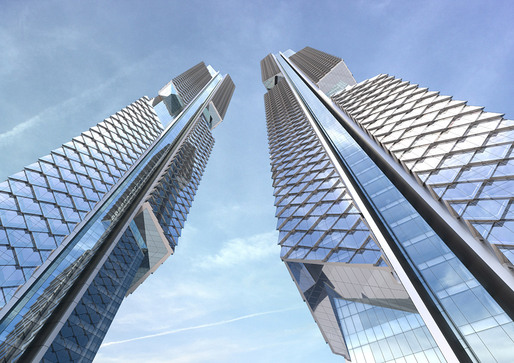 According to Chicago Curbed.com:

Now that Chinese developer Wanda Group, Chicago’s own Studio Gang and the City of Chicago have all finally coordinated on the public announcement of the new supertall tower that has been in the works for at least the last few months, the project has gotten way more real. However, there’s been some changes to the design and height of the tower since it was first announced by a Chinese news outlet in July. According to the Tribune’s Blair Kamin, the tallest of the three interlocking towers will actually be on the west side of the trio, versus the original plan of having the tallest tower on the structure’s east side. In addition, the tower has been chopped down to 88 floors from the originally planned 89, leaving some speculation about whether the new Wanda Vista will actually become the city’s third tallest building.

According to Kamin, there’s really no hard answer to why the floor count has been lowered by one, but it could have something to do with Chinese superstitions about the number eight. Either way, one of the biggest questions and unknowns is whether the tower will edge out the 1,136 foot tall Aon Center on Randolph. However, it’s clear that the tower will certainly be much taller than its direct neighbors at Lakeshore East.

In addition to the updated details about the tower, a few new renderings were also released yesterday, including a couple that offer interior shots of presumably the hotel lobby and dining area. One plan that hasn’t changed however is including a five-star hotel and condos — exactly 390 of them. In addition to its lodging and residential components, the tower is also expected to have about 9,000 square feet of retail space.

The project is still at least a year out as Wanda Group and Magellan Development hope to break ground on the project in 2016. Because Wanda Group is footing $900 million for the project, it’s expected that construction could begin without the need for unit presales. According to the mayor, the project will provide roughly 2,000 construction jobs, becoming one of the biggest projects Chicago has had in quite a while.