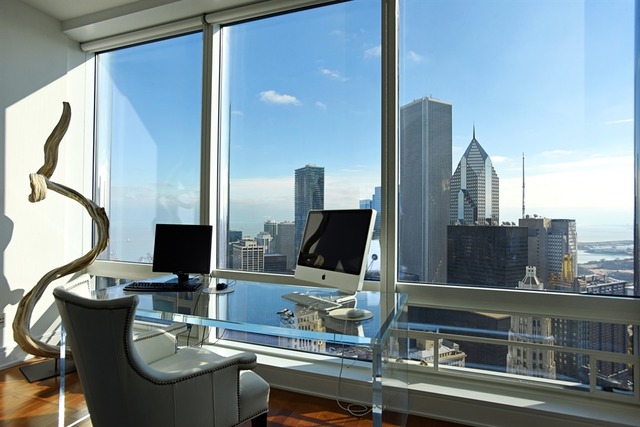 According to Chicago Architecture:

Chicago’s Trump International Hotel and Tower marked the end of a long drought in the city’s super tower scene. The 1960’s saw the Hancock Center rise into the sky. In the 1970’s it was the Sears Tower and the Aon Center. Then… nothing. Several proposals, including ones for what would have been the world’s tallest buildings, failed to come to fruition. The Chicago skyline as seen in the 1980’s film Ferris Beuller’s Day Off would remain much the same decades later as a new century dawned.

It was real estate mogul and international showman, Donald Trump who eventually stepped up to the plate with a plan to replace the grandiose 1950’s metal shed that was the Chicago Sun-Times building with a glittering tower bearing his name. At first there was much excitement as The Donald’s organization made the announcement. But that evaporated into disappointment in 2001 when the first sketches came out of revered local architecture powerhouse SOM. It showed a multi-tiered silver-glass giant that didn’t so much soar into the sky as squat along the Chicago River. Simply put, it was too wide, not majestic, and made a mockery of the architectural wonders next door — the Wrigley Building, the Jewelers Building, and the Tribune Tower.

A subsequent revision in 2002 by SOM’s Adrian Smith was a significant improvement. It definitely fit in with the city’s then-architectural trend of putting illuminated spires on everything. But alas, it looked a lot like the beloved, yet time-worn Sears Tower. This was primarily because of the use of stacked boxes. Even though they were not square, but octagons and hexagons, the design seemed too familiar.

The third time was the charm. The final edition of the plan dropped the angles in favor of curves, and massed the sections in such a way as to evoke a ship of commerce steaming through the city. It’s the same sense one gets from looking at the Wrigley Building next door from the correct angles. Prow and prowess.

The Trump Tower Chicago makes great use of its available space while creating another icon in the city’s skyline. Also important, its setbacks pay homage to the Art Deco-era skyscrapers that made Chicago a living architectural museum. And it manages to reach for the stars without stepping on the feet of other buildings in the area. To its neighbors, it appears as an equal. That’s because the first setback is at the same height as the cornice on the Wrigley Building, the second is the same height as Marina City, and the third is at the top of the former IBM Building across the street.