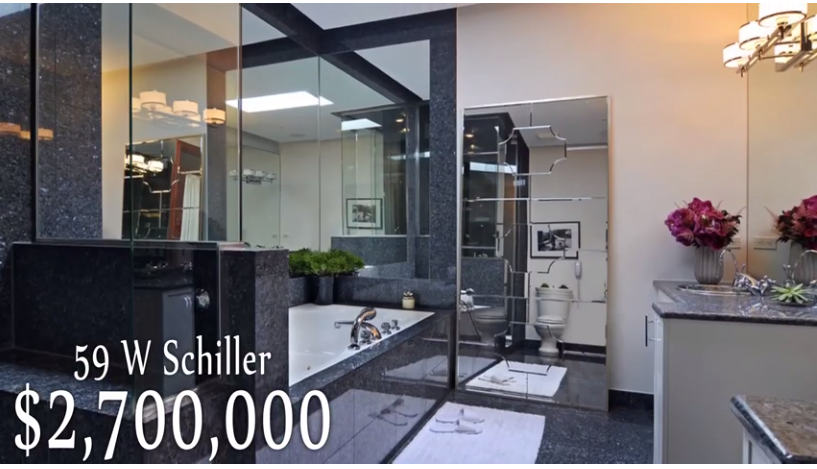 According to Gold Coast Neighbors, here is the history:

The Gold Coast Neighborhood is one of Chicago’s most treasured residential areas with its quiet, tree-lined streets, stately homes and connections to the city’s past. First known as the Astor Street District, in the late 1800’s, it started at North Avenue and ran south along Astor to Division Street, then called Bishop’s Street. Today, the Astor Street District is within the larger neighborhood of the Gold Coast which extends from North Avenue south to Oak Street and from the lake as far west as Clark Street.

Astor Street is named after John Jacob Astor. Although he never lived in Chicago, the street was named to honor his achievements; he was one of the richest citizens in the United States. At the time of his death in 1848 his estate was worth $20 million, the equivalent of $78 billion today. Astor was the founder of the American Fur Company and an investor in New York City real estate. His name gave a luster to the area, which has never diminished.

One of the early landowners in the neighborhood was Potter Palmer, who played a significant role in the development of Chicago business and the Gold Coast. When most of his contemporaries were living on Prairie Avenue, south of the business district, Palmer began to buy up land on the north end, which was only lightly populated and still mostly swamp after the Great Chicago Fire in 1871. He also owned a three quarter-mile area of State Street in the business district, where he started a dry-goods business with Marshall Field and Levi Leiter. Palmer later went on to build the Palmer House Hotel as a gift to his wife Bertha Honore. Both the store and the hotel were destroyed in the Great Fire and had to be rebuilt.

Interest in the area increased when Lake Shore Drive was opened in 1875 from North Avenue to Oak Street, and a favorite Sunday afternoon pastime became a ride along the lakefront. By 1882 the Palmer family had started building one of the first mansions on the drive in the block between Schiller, originally called Church Street, and Banks, originally named Division Street. This block became known as the Potter Palmer Homestead. The Palmers’ gothic castle at 1350 North Lake Shore Drive, said to look like a goldfish bowl castle, became the center of Chicago’s high society. Bertha Palmer had an extensive collection of Impressionist paintings, many of which now belong to the Art Institute of Chicago. The Palmer mansion was demolished in 1950.

However, the oldest home in the district belonged to the Chicago Archdiocese. In 1880 Archbishop Patrick Feehan was one of the early neighbors of the Palmers, living at 1555 North State Parkway. Another early homeowner in the area was James Charnley. He built his wealth in the timber industry, bought his land from Potter Palmer and moved into 1365 North Astor in 1892. The Society of Architectural Historians now operates from this home, known today as the Charnley-Persky House.

Other early families in the area included Vallette Kasson, Horatio N. May, Thomas W. Hinde, James L. Houghtelling, and William O. Goodman, also in the lumber business. It was his son, Kenneth Sawyer Goodman, the playwright, from whom The Goodman Theatre got its name. The neighborhood also included Joseph T. Ryerson Jr., who ran an iron/steel company; Edward P. Russell; Robert Todd Lincoln, the only surviving child of Abraham and Mary Todd Lincoln; and Albert F. Madlener, who was a successful liquor wholesaler. The Madlener House at 4 West Burton and State Street now houses the Graham Foundation for Advanced Studies in the Fine Arts.

Within 20 years of the opening of Lake Shore Drive, the Gold Coast community had been established. As the city of Chicago grew rapidly in the last quarter of the 19th century, Astor Street on the north side developed more densely than Prairie Avenue on the south making more economical use of the land and creating true city houses, abutting one another on their narrow sites. This emphasis on land use also brought high-rise apartment buildings to the neighborhood, made fashionable by second generation Potter Palmers.

A few exceptions were made when, for example, Joseph Medill, founder of the Chicago Tribune and former mayor of Chicago, had the largest house on Astor Street built as a present for his daughter, Elinor “Nellie” and her husband, Robert Wilson Patterson, Jr. Constructed in 1893, it occupies the northwest corner of Astor and Burton. The house was later owned by John Wrenn, and then was purchased by Cyrus Hall McCormick, Jr. Cyrus ran the International Harvester Company started by his father who invented the reaper. However, in 1978 the home was divided into condominiums.

From its earliest days, the Gold Coast Neighborhood has been home to many important Chicago families, people who have contributed substantially to the social, cultural and economic history of the city. The Astor Street District is important as a reminder of the history of the city of Chicago. Today’s owners and residents appreciate this legacy and strive to preserve and enhance the quality of life and the beauty of the area.

By Owner in Chicago Video